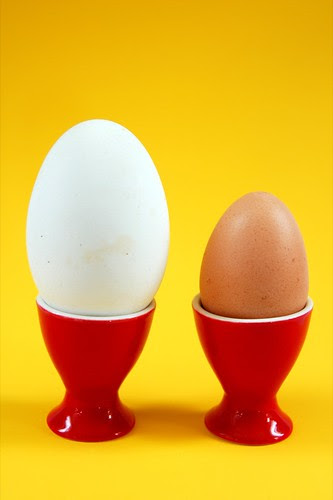 When confronted by such a sight, first thoughts might be of sympathy towards the poor chicken that had the misfortune to lay such an egg.

But that would be misplaced as the culprit responsible for that egg is a Goose and surprisingly, it’s not golden.

There’s only one place I’ve found Goose eggs and for those in Melbourne, you’ll need to go to Farmers’ Market at the Collingwood Children’s Farm to find them.

To give you an idea of their size – the yolk and white weighed 145 grams or just over 5 ounces – you’ll need to adjust recipes to take this into consideration.

Goose eggs share properties found in duck eggs – higher fat and richer yolks make them the choice for baking. You might also like to take Michel Roux’s advice and use them for Quiche.

I decided that the KISS approach was best and opted to make an omelette filled with rocket (arugula), cheese, tomato and freshly carved ham. I did stray a bit from the simple approach and added a little fresh ricotta to the beaten egg – it’s not everyday that we get to enjoy these beautiful eggs. The egg might not have been golden but the omelette certainly was! 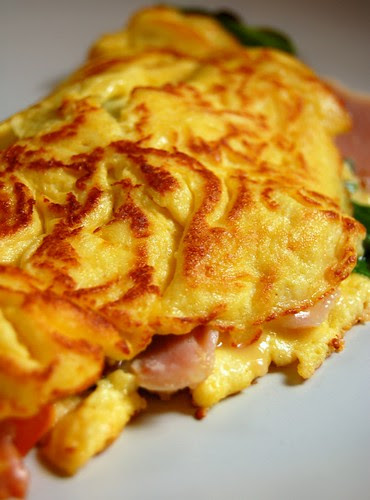 Push the ricotta through a mesh sieve, then add the egg. Whisk to combine then season with freshly ground salt and white pepper.

Heat a skillet with a generous knob of butter and when the butter has almost melted, add the egg mixture. Let this cook for 10 seconds then start pushing the edges towards the centre. Keep doing this and tilting the pan to let the uncooked egg run to the edges.

After a little while you’ll find that the top will still be squishy and moist but there’s no egg run-off. Shake the skillet to make sure the omelette isn’t sticking.

Because I like my omelette on the soft and squishy side, it’s at this stage that I’ll start adding the filling. If you like your omelette less runny then cover the skillet and while still shaking the pan, let the surface dry out.

I’ve folded this omelette rather than rolling so I placed the fillings on one side of the omelette. First a little grated mozzarella followed by a generous handful of rocket leaves, diced tomatoes and roughly ripped pieces of ham then a little more grated mozzarella.

Fold the empty half over the filling and jiggle the omelette towards the centre of the pan. Cover the skillet, turning down the heat to allow the filling to warm. After a minute, flip the omelette, cover and cook for another 30 seconds or until the cheese has melted.

Slide onto a plate and eat at once!